The promise and perils of London as a smart city, by Dr Lawrence Ampofo

By lawrence14th May 2016Smart Cities
No Comments

Home » Blog » The promise and perils of London as a smart city, by Dr Lawrence Ampofo 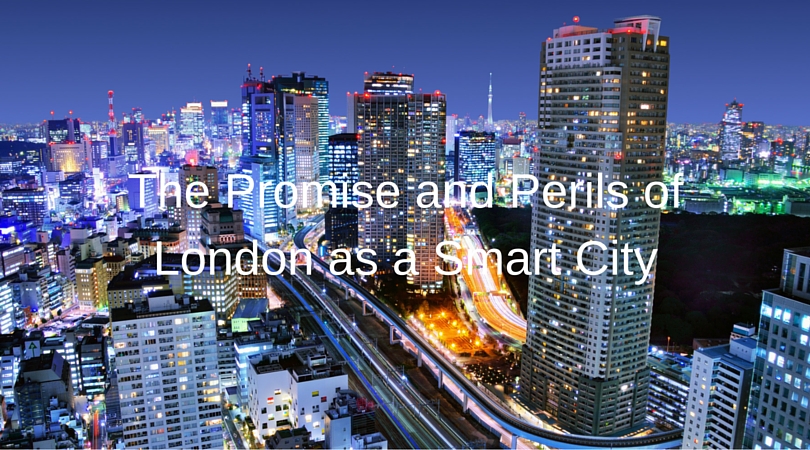 Many of the features that lead London to be considered a leading smart city are world-leading applications of design, planning and technology

The London of 2016 is almost unrecognisable compared with the London of only ten years ago. Real-time travel updates, open data, and smart buildings are fast becoming commonplace in this expanding city of8.6 million people. In addition to the oft-stated monetary value of the Internet of Things and Smart Cities, there are other, more practical benefits of living in a Smart City. Londoners now expect the application of digital technology to address social, environmental and economic issues in the cityscape. We now expect our city to be ’smart’.

There are plenty of genuine reasons for Londoners’ high expectations, and they come at time when London has to solve a number of great challenges. Therapid population growth and application of smart technologies within the city help meet the challenges of resource consumption, while the improvement of public services by the enhancement of the quality of information available, and facilitating better management of resources can be seen around the city.

Indeed, many of the features that lead London to be considered a leading Smart City are world-leading applications of design, planning and technology. I encourage you to spend some time walking around London and smart city design is springing up all around us. Bottom up approaches to smart city development are positively influencing not only the quality of services in London, but also the quality of civic participation increases with greater numbers of people included into key decisions on how the city and their Borough Councils are run.

It isn’t all roses however. London faces a number of significant challenges to maintain its pre-eminence as a pre-eminent smart city. Connected devices and the Internet of Things remain a confusing prospect for many companies and institutions. As a result, business models that get the most from this new ecosystem are in their infancy. The lack of viable business models also restricts the flow of private sector financing because of uncertain financial returns and perceived long payback periods.

In addition, the wider impact of smart city technologies is yet to be felt because the 33 London Boroughs have historically found it difficult to work together and across departments. Effective smart city developments require that different initiatives link different policies with information systems; meaning that sometimes competing institutions and departments need to work together. The lack of cohesion and reticence for information sharing yields a clunky approach to solving big problems.

Privacy is, of course, the other elephant in the room and, at present, people have deep concerns about the way their personal data is stored and secured. London, along with other smart city leaders such as New York and Amsterdam, has pioneered the Open Data movement with The London Datastore platform that makes public data open and accessible and care.data, the platform that integrates data from GPs with hospital medical files. Initiatives such as these go a long way to reducing the concerns people have about sharing their personal data by benefitting from the free public data made available.

London is a marvel, a living testament to the best of ancient history and modern technology. It stands as an example for any city to effectively support millions of people. Smart technologies are playing a crucial role in this but for Londoners to experience their full impact, political red tape and human nature will have to be relaxed to allow greater inter-institutional cooperation, greater public access to data and greater ingenuity in finding creative models that can get real value from smart, connected technologies.