The Connected Donor: Why Not-for-Profits Need the Internet of Things

By lawrence2nd February 2016International Development, Internet of Things
No Comments

Home » Blog » The Connected Donor: Why Not-for-Profits Need the Internet of Things 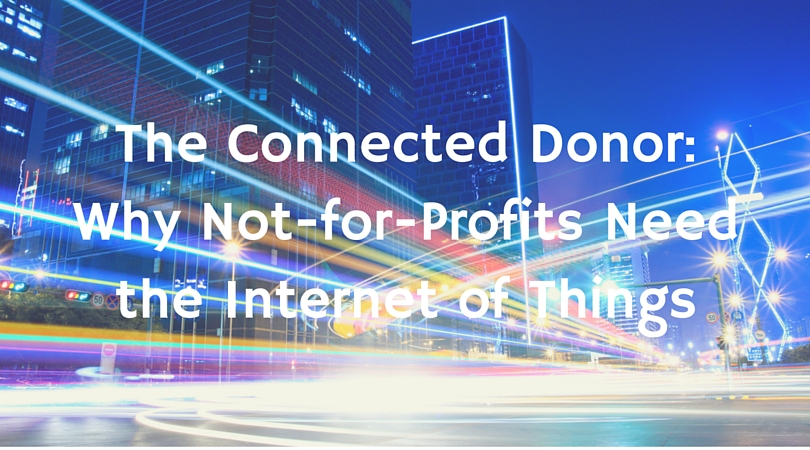 The Internet of Things has the potential to irrevocably change the nature of society; including the not-for-profit industry. It also gives rise to the ‘Connected Donor’; a hyperconnected, information savvy and, worldly type of person. If Not-for-Profit organisations are to take advantage of the immense benefits presented by the IoT and the Connected Donor, they have to demonstrate ‘connected thinking’, new and unconventional methods of engagement to reap significant benefits to the bottom line.

The Internet of Things (IoT) is a red hot topic. Respected commentators and mainstream media have spoken at length about the potential these technologies have to impact the way we live, govern and trade. The idea that 50 billion to 1 trillion sensors will connect everything and everyone to the Internet in one big global (and cosmic) network is tantalizing and one can only speculate as to how such a network could impact on our lives.

Much of the discussion about the Internet of Things at the moment is being driven by the people who design and build the technologies that underpin it. However, to think creatively about how these technologies will affect business and not-for-profits, it is necessary to think beyond a strictly technological framework.

The global charitable giving landscape is a complex panorama. As digital data permeates virtually every element of the operations of charities, opportunities to engage with donors, fundraise and advocate abound. Online donations are increasingly used by donors as the means by which to engage with charitable organisations and causes and all the indications show that this trend is only set to increase. As a result of this, the rise in importance of the Connected Donor cannot be understated; they are simultaneously extremely difficult to engage and represent boundless opportunities.

Who Is the Connected Donor?

When I spoke about this phenomenon recently I made the point that the Connected Donor now expects to participate in global discussions and, at times, to directly influence their direction. She is surrounded by a multitude of devices at all times.

Interestingly, the Connected Donor is more likely to donate to charity, which pays underscores an emerging global trend that Millennials are less interested in working for money than they are in genuinely engaging in global causes. This means that while Not-For-Profits operate in a complex and competitive marketplace, the Connected Donor is also ready and willing to engage with successful Not-for-Profits.

The Connected Donor is also highly visible and emotionally vulnerable, their every move and emotion represented by digital data, mediated by the proliferation of digital devices, and high speed near-ubiquitous Internet. The emergence of this new type of donor is attractive to charitable organisations but, how to best capture their attention and engage with them? And what role can the Internet of Things have in facilitating that?

6 Steps To Successfully Engage With The Connected Donor

Hyper-Personalised Giving: Many respected commentators believed that the 2014 ALS Ice Bucket Challenge made a mockery of charitable giving, that it merely showed people wanting to ape their friends and not truly support ALS Research. Some even suggested that the charity did not use the considerable funds it collected correctly, that much of it wasmisappropriated. Notwithstanding the arguments, it was clear that millions of people around the world did accept the challenge because each time an ice bucket was tipped, it was driven by the donor’s personal relationship with the person who had nominated them. This example of ‘hyper-personalised giving’ shows how charities can fully engage the Connected Donor through highly personalised interactions with the donor, that are emotionally relevant and are highly shareable.

Increased Access to the Organisation: The Connected Donor expects to play a greater role in the causes she contributes to. With a multitude of digital touchpoints for donors to facilitate that expectation, charitable organisations have an opportunity to embrace Radical Openness and increase access to the operations of their campaigns. Charity : Water’s model of feeding back information of their projects in the field directly to donors is a great example of the way a charitable organisation can provide greater transparency of its projects and build trust amongst its donor community at the same time.

Branding: The IoT provides the tools to more accurately measure brand engagement by capturing various brand preferences by the Connected Donor such as body temperature, emotional reaction, body temperature, eye movement and other human responses to logos, mascots and even street fundraisers, allowing them to derive more accurate feedback than is possible from current research methods, thereby improving customer relationships and lowering costs.

Impact: The Connected Donor has a similar mindset to that of an entrepreneur in that they expect to see the impact that their donations are having. They expect to see that specific projects have been successfully completed and are making a real contribution to the lives of people less fortunate. If this is not done, donors will immediately seek charitable organisations that can make a positive impact on people’s lives and report that impact.

The connected donor is worldly, hyperconnected and willing to donate to numerous charities. However, they demand far more from charitable organisations and expect to see the “ROI” of their donations quickly. However, charitable organisations that can respond to these new donors can expect far greater engagement from this burgeoning group of people.

Marketing – Advanced big data aggregation and analytics have the ability to gain feedback from donors, report it to decision makers and give them the opportunity to take appropriate action. Detailed insight on donor behaviour from digital data can be analysed in real time rather than the traditional survey method. Charities can have robust, real-time information on what donors want and do not want, vastly improving their operations.

Promotion – Smart promotions can measure eye movement and obtain real-time feedback on the parts of ads that are being viewed or ignored. Donors can respond to ads automatically by using mobile devices to request more information or donate directly. Using the IoT, online content can be hyper-personalised to individual customer interests, time of day, and click-through rates.